Superboy (DC Comics) is a notable user of this ability and uses it to stimulate Kryptonian powers.

The user is completely surrounded by a field of telekinetic energy, protecting them from harm and physical damage, enhancing their physical abilities, and allowing them to manipulate objects that they can touch or flying by pushing their body through the air. 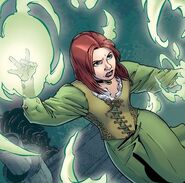 Superboy (DC Comics) can use his tactile telekinesis to do such things as propelling objects off of the ground...

...and hear over the worlds needs.

While within his ROOM, Trafalgar D. Water Law (One Piece) can use his Takt technique, a powerful form of spatial telenkinesis that can manipulate any objects within his barrier.

Sogitta Gunha (Toaru Majutu no Index/Toaru Kagaku no Railgun) uses his Amazing Punch special move which he thinks he creates an unstable wall of psychokinesis in front of him and destroys it with his fist,causing it to send an explosive after-effect at long distance...

...as well as jump on the air to stop himself from falling down from the air by kicking the air.
Add a photo to this gallery
Retrieved from "https://powerlisting.fandom.com/wiki/Tactile_Telekinesis?oldid=1417415"
Community content is available under CC-BY-SA unless otherwise noted.