Cause objects to home in on any target.

The ability to cause objects to home in on any target. Sub-power of Lock-On Imprint. Variation of Bullet Manipulation and Homing Effect.

User can cause objects, when set in motion, to home in on a target and invariably reach it. It can be used to hit a target from miles away only by throwing a rock that the user has charged, causing it to "lock on" to the user's intended target. 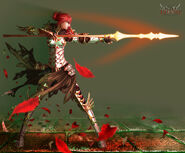 Claire Adelheid (Anima: Beyond Fantasy) always target the heart of her enemies by using Gae Bolg, bending itself if the target tries to dodge or parry the attack.

Durham Glaster (Black Cat) can have his bullets (made of his ki) to redirect into his opponent.

Tien Shinhan (Dragon Ball Z) locking onto Cell to hit him with...

Mercenary Tao Tao Pai's (Dragon Ball) Super Dodon Wave locks on to his opponents' biological waves, ensuring that it will chase them until it hits.

Frieza's (Dragon Ball Z) Tsuibi Kienzan can chase down and cut anything, as long as he maintains his concentration on its movements.

Golden Frieza's (Dragon Ball Super) Grand Death Beam, a ten-fingered, guided version of his Golden Death Beam, will each chase down any target Frieza designates until it has pierced them, upon which the beam will continue towards the next target. 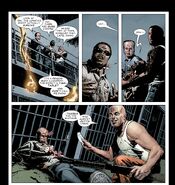 Bullseye (Marvel Comics) can throw virtually any object with incredible accuracy and enough force to be lethal.

…will home in as a deadly projectile.

...and all projectiles he launches will strike the bulls-eyes without fail.

Catastrophbia (Marvel Comics) using his power as the god of war... 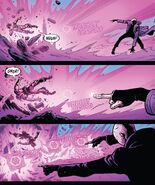 to create target markers that zero in pulse blasts from afar upon a target.
Community content is available under CC-BY-SA unless otherwise noted.