Blue Beetle (DC Comics) utilizes enchanted alien technology which metaphysically adapts and augments him from the inside out.

Utilize a symbiotic armor designed of magic and technology.

The power to use technomagical symbiotic armor. Variation of Symbiote Creation. Combination of Magitek Physiology and Symbiotic Costume.

The user possesses a technomagical armor that is symbiotically bound to their body. This armor acts as an exoskeleton empowering them through arcane and scientific means, compensating for the weaknesses of the wearer on top of filling in the faults, blind-spots or shortcomings between mysticism and physics by making them complement one another, constantly augmenting and adapting itself and its wearer on the fly. 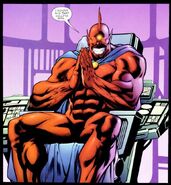 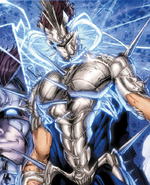 Destroyer (Marvel Comics)
Add a photo to this gallery
Retrieved from "https://powerlisting.fandom.com/wiki/Technomagical_Symbiotic_Exoskeleton?oldid=1414937"
Community content is available under CC-BY-SA unless otherwise noted.