Deathmate's (Valiant Entertainment) blood was enriched by cutting edge microtechnology for her creation to be possible.

The user's bloodstream is primed with technorganical machines, and in charge to reorder and adjust one's personal (physical/mental/etc.) qualities beyond their usual norm; that said, unlike Microrg-Active Blood and Nano-Active Blood, the ability's qualities are from both sources of the previously mentioned, making the user's personal enhancements varyingly extensive and versatile.

Practically it makes them tech-org technology as they are themselves, offering the capacity to modify and/or alternate physiology to a profound degree. 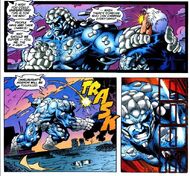