The power to manipulate the tectonic plates under the planet's crust. Sub-power of Earth Manipulation, Magma Manipulation and Planetary Manipulation.

The user can shape and manipulate tectonics (the process that controls the structure and properties of the planet's crust and its evolution) and tectonic plates (the large-scale motion of large plates and the movements of smaller plates of the planet's lithosphere). They manipulate the processes of mountain building, the growth and behavior of the strong, old cores of continents (cratons), the ways in which the relatively rigid plates that constitute the planet's outer shell interact with each other and the earthquake and volcanic belts. 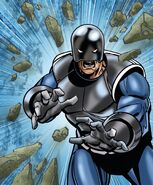 Skaar (Marvel Comics)
Add a photo to this gallery
Retrieved from "https://powerlisting.fandom.com/wiki/Tectonic_Plate_Manipulation?oldid=1508718"
Community content is available under CC-BY-SA unless otherwise noted.