possess powerful telekinetic extensions of oneself.

The ability to possess powerful telekinetic extensions of oneself. A sub-power of Telekinesis and Telekinetic Force Manipulation, variation of Aura Constructs and Other Aura.

Users are granted telekinetic extensions of themselves (generally in the form of additional limbs) controlled naturally through both conscious thoughts and instinct, as if they were parts of their own body. These limbs are invisible (depending on users choice), intangible (most of the time) and their actual shape is variable, being generally based on the user's main appendages (hands/arms for humanoids).

Their number, reach and strength varies between users, but they remain invariably centered on their body. These arms possess incredible strength, being capable of tearing apart, cutting and crushing extremely resilient materials like paper. They are also extremely fast and precise, following the user's thoughts instantly and exactly. They notably possess a perceptive aspect, allowing the user to instinctively sense things through them.

During a fight, they can be used to deflect most attacks with frightening reactivity, and obliterate most targets with stunning speed and power. Being essentially intangible, they can phase through most protections and directly target the most vulnerable parts (like internal organs or a vehicle's pilot). They are also very useful to neutralize opponents, physically overpowering them in a heartbeat, and keeping them submissive in a multiple telekinetic grip, all while appearing calm and passive.

A skilled user can control the telekinetic aura at a cellular or molecular level, allowing them to be used for healing or delicate operations.

As one might imagine, these superiors additional arms are also very handy for a large variety of mundane tasks. 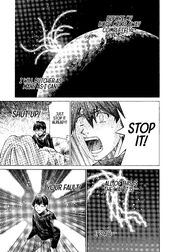 Jodie Holmes (Beyond: Two Souls) is bound to a spiritual entity who serves as her means of overcoming all challenges through telekinetic interaction with her surroundings.
Add a photo to this gallery
Retrieved from "https://powerlisting.fandom.com/wiki/Telekinetic_Aura?oldid=842354"
Community content is available under CC-BY-SA unless otherwise noted.
FandomShop Newsletter Join Fan Lab