The power to emit blasts of telekinetic energy. Sub-power of Telekinetic Attacks. Combination of Energy Blast and Telekinesis.

Most Espers (Mob Psycho 100) can use Telekinetic Blast byusing their psychic power as an ignition to generate and induce explosions of varying power.

Mr. Gold/Rumplestiltskin (Once Upon a Time) defeats Emma Swan with a telekinetic blast.

Prue Halliwell (Charmed), in her future self's body, unleashed a telekinetic blast with a small hand gesture, destroying the attic and causing a large explosion.

Barbas (Charmed) can to generate a wave of telekinetic energy.

King Nikolaus (Witches of East End) used this ability to against the Beauchamp witches.

With his telekinetic abilites, Manchester Black (DC comics) can unleash powerful telekinetic blasts that able to harm even Superman.

Should Scaos the Sinkeeper (Kaiju Combat) ever remove his muzzle, he could potentially channel his nearly infinite store of Pain, Anger, Hatred, and Misery into an indiscriminately devastating mental attack. 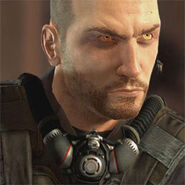 Jodie Holmes (Beyond: Two Souls) can by proxy of her spiritual partner blow things of various sizes out of her way.

Psions (Destiny) are minor infantry who are able to create bursts of psychic energy.

While he normally doesn’t express any emotion, if Dufort (Zatch Bell!) somehow becomes stressed, he loses control of his psychic abilities and and give off blasts of telekinetic energy.

Psychics (Psychonauts) are able to take their strong and aggressive emotions and focus them into the form of PSI-blasts.

Fergie telekinetic blasts
Add a photo to this gallery
Retrieved from "https://powerlisting.fandom.com/wiki/Telekinetic_Blast?oldid=1700450"
Community content is available under CC-BY-SA unless otherwise noted.