A Jedi (Star Wars) can use the Force to sense the approach of an enemy.

"I sense something, a presence I've not felt since…"
― Darth Vader (Star Wars)

The user has telekinetic accurate senses, allowing them to see, hear, smell, taste, and touch better with psionic energy/focus. They can hear any sound at any volume or pitch, know the exact location of how far it is, following and seeking any distance to know where the noises come from. See what is happening at further distances, even through solid surfaces. Smell/taste anything they come across, knowing the exact details of the scent being tracked, traced, and carried. Touch the texture of objects they have a telekinetic hold on, to feel when other objects/subjects come into contact with them. 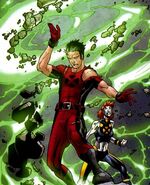 Madame Xanadu (DC Comics)
Add a photo to this gallery
Retrieved from "https://powerlisting.fandom.com/wiki/Telekinetic_Senses?oldid=1508741"
Community content is available under CC-BY-SA unless otherwise noted.