An Avatar (Charmed) prevented a Possessor Demon from shimmering away.

The user can prevent themselves or others from being teleported and/or teleporting and negate any form of teleportation from Elemental to Spatial teleportations. 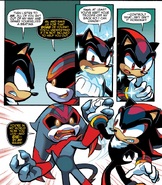 While being possessed by Kuurth, Juggernaut (Marvel Comics) could prevent himself from being teleported away.

After absorbing the souls from Purgatory, Castiel (Supernatural) was able to prevent Raphael from teleporting.
Add a photo to this gallery
Retrieved from "https://powerlisting.fandom.com/wiki/Teleportation_Negation?oldid=1294813"
Community content is available under CC-BY-SA unless otherwise noted.