Donna Dunlap (Heroes) can see an airplane passenger from in a high plane from the ground.

The ability to see distant objects in magnified scale. Sub-power of Enhanced Vision and Sense Focusing.

The user can zoom their vision in on things, allowing them to see distant objects in magnified scale. They may be able to see vast distances, outside the atmosphere, solar-system or even galactic distances.

Marcus Milton/Hyperion (Marvel Comics) seeing objects, even a minuscule things like strands of DNA, in clear detail from orbit.

Sanji's (One Piece) Mellorine Vision can spot a shirtless woman from a mile away.

Viola (One Piece) can see clearly over great distances with her Glare Glare no Mi.

Eagle Scope (Xiaolin Showdown) can be used as a telescope. 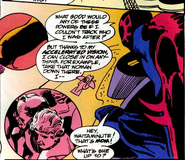 Chase’s (Lab Rats) Bionic Eyes allow him to see far thing close up.
Add a photo to this gallery
Retrieved from "https://powerlisting.fandom.com/wiki/Telescopic_Vision?oldid=1657677"
Community content is available under CC-BY-SA unless otherwise noted.