By manipulating her cells at a genetic level, Anais Gaia (RoboCop: Alpha Commando) can rejuvenate her telomeres, maintaining her youth.

regenerate the length of one's telomeres.

"I've seen every Tarzan ever made, twice. I get the picture."
― James "Logan" Howlett/Wolverine to Gahck (Marvel Comics)

The power to restore one's telomeres to their optimal lengths. Sub-power of Telomere Manipulation and Regenerative Healing Factor. Opposite to Telomere Reduction.

The user can regenerate the length of their telomeres. Telomeres are a region of repetitive nucleotide sequences at each end of a chromatid, protecting the DNA fragments; they grow shorter as cell division occurs, an indication of the person getting older. By regenerating the lengths of telomeres, one can extend their own lifespan indefinitely.

Perrinia immortalis/"Blood Orchid" (Anacondas: The Hunt for the Blood Orchid), contains a unique, naturally generated chemical that extends an organism's telomeres, enabling those who consume them to live longer. 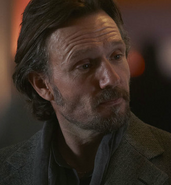 Thanks to his Body Supremacy, Stanton Parish (Alphas) has perfect cellular regeneration, repeatedly rejuvenating his telomeres and maintaining his youth for 200 years.

In addition to granting him vast regenerative powers, Tenzen Yakushiji's (Basilisk) symbiote also "eats" away the ravages of time, rejuvenating his telomeres and maintaining his youth for over 200 years. 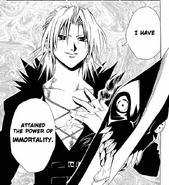 Thanks to the God's Breath nanomachines in his body, Creed Diskenth (Black Cat) possesses such perfect regeneration that his telomeres are constantly relengthened, maintaining his youth and peak condition.

In addition to healing the sick and being able to resurrect the dead, the Lazarus Pits (DC Comics) also rejuvenate the telomeres of whoever bathes in them. Thus, by continuously using the pits, Ra's al Ghul has maintained his age at its prime for over 600 years.

By continuously lengthening her telomeres, Tomiko Asahina (From the New World) has not only remained young and beautiful, but has lived for over 267 years.

Adam Monroe's (Heroes) cells have regenerated so many times that they are now regenerating and dying in equilibrium, constantly rejuvenating his telomeres and rendering him young for over 400 years.

Mystique (Marvel Comics) rejuvenates her cells whenever she metamorphoses, thus rejuvenating her telomeres, maintaining her age at her prime.

Wolverine (Marvel Comics) possesses regenerative powers of such levels that they even re-lengthen his telomeres, maintaining his age at his prime. 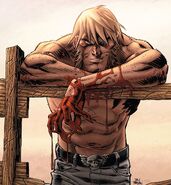 Like his nemesis Wolverine, Sabretooth (Marvel Comics) possesses regenerative powers of such levels that they even re-lengthen his telomeres, maintaining his age at his prime.

As his healing factor is derived from Wolverine's, Deadpool (Marvel Comics) possesses the same degree of regeneration, his telomeres constantly re-lengthening and maintaining his age at its prime...

...to the extent his counterpart in the Earth-80521 reality was still alive and active as Deadpool 800 years into the future.

The mitochondria in Aya Brea's (Parasite Eve) body constantly rejuvenate her telomeres, making her appear to be in her early twenties despite actually being in her late thirties. 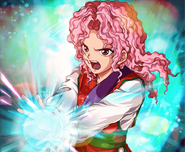 Using the Reihado-ken technique, Genkai (Yu Yu Hakusho) manipulates her cells, regenerating her telomeres and temporarily restoring her to her physical prime.
Community content is available under CC-BY-SA unless otherwise noted.