Dialga (Pokémon), legendary dragon Pokémon that can alter the flow of time, using "Roar of Time".

The ability to generate from within oneself temporal energy and release them from the mouth.. Sub-power of Time Attacks. Variation of Breath Powers.

The user is able to generate and manipulate temporal energy within them in a way that allows them to shape the exhaling of the effect. These shapes can include bursts, streams, spheres, even a mist of it from the mouth. 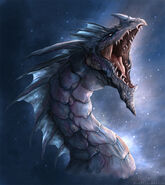 Time Dragons (AD&D) can breathe out a beam of temporal energy.
Add a photo to this gallery
Retrieved from "https://powerlisting.fandom.com/wiki/Temporal_Breath?oldid=989701"
Community content is available under CC-BY-SA unless otherwise noted.