Aeon (Castlevania: Judgement) is a time guardian who watches over the time and preserves its flow. As such, he is able to control time and walk through it.

Be a protector of all time.

The ability to be a protector and keeper of the fabric of time. Variation of Guardianship. Not to be confused with Temporal Entity Physiology.

The user is a protector and keeper of the fabric of time. Unlike Temporal Entity Physiology, the user doesn't become a temporal being of a higher existence, but merely a protector that oversees time and is in charge of keeping its flow in check. However, they acquire special abilities that allow them to control all aspects of time in order to make sure all events within it are in their proper place.

Vector Prime (Transformers: Cybertron) is Primus' appointed guardian of space and time as well one of the thirteen original Cybertronians.

Professor Paradox (Ben 10 series) is a protector of time and possesses knowledge of how the space-time continuum works.

One of Link's incarnations (Legend of Zelda series) is known as the Hero of Time, using his Ocarina of Time and the Master Sword to travel through time and defeat Ganondorf.

Time (Alice Through the Looking Glass)

The Great Clock (Ratchet and Clank: a crack in time) was be created to protect time.

The agents of the ministry of time (Ministry of Time) protect the Spain´s history...

Sailor Pluto (Sailor Moon) is the Guardian of Time and Space. 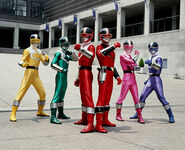 The Dahaka (Prince of Persia) is the guardian of the timeline; when something exists in the timeline that should not be there, the Dahaka is sent to erase it.