In order to teach Sam that nothing good will come of their sacrifices for each other, Gabriel (Supernatural) once trapped the Winchesters in an endless loop with Dean again and again.

"Temporal manipulations can create branches in time. Unstable dimensional openings, spacial paradoxes, time loops! You want to get stuck experiencing the same moment over and over again forever, or never having existed at all?"
― Karl Mordo (Marvel Cinematic Universe)

The power to loop time and trap anyone or anything into reiterating time stream. Sub-power of Time Manipulation.

User can trap anyone or anything into a reiterating time stream where everything inside the loop is restarted precisely every so often, possibly even backwards. They may be able to force someone to relive the same minute, hour, day, week, month, year, etc. for as long as the user keeps them there. On some occasions people have been known to retain a small amount of memories or eventually escape weaker temporal loops.

Mayuri Kurotsuchi (Bleach) has developed a Postcognition Drug that cause the victim to enter a time loop...

...in the case of Toshiro Hitsugaya which each time he uses his Bankai to kill him...

...he ends up being sent to the past which he is forced to kill him again...

...ending up back in the same time before he killed him...

...to the point that causes strain on his brain for 30 seconds...

...and the effect will continue, the only way to exit the loop is to not kill Mayuri.

Yoshikage Kira's Stand, Killer Queen's (JoJo's Bizarre Adventure Diamonds are Unbreakable) third bomb, BITES THE DUST, allowed him to loop time from one hour to one day earlier to the bomb's explosion… 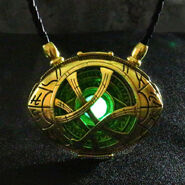 Powered by one of the Infinity Gem/Stones, the Eye of Agamotto (Marvel Cinematic Universe) is a powerful magical artifact created by the Sorcerer Supreme Agamotto with the power to manipulate time…

…which Doctor Stephen Strange wields to create an endless time loop to trap Dormammu in unless he bargains with him.

DNAliens (Ben 10) use the Time-Loop Generator…

…to generate a controlled time loop.

Time (Alice Through the Looking Glass) traps the Mad Hatter and his friends in a time loop using the clock on his chest, making their tea party go on forever.

SCP-087 - The Stairwell (SCP Foundation) doesn't seem to have an endpoint due to the space-time anomaly trapping the stairwell in a temporal loop, which can also trap victims from within.

Having a temporal anomaly, SCP-1775 - Retail Specters (SCP Foundation) restores itself to the way the building was supposed to be prior to 1979 due to the temporal phenomenon affecting the building between 09:00, and 20:00.

The Do-Over-Inator (Phineas and Ferb) can create loops via to reversing time.

Mercurius (Dies Irae) is the God of Eternal Recurrence.
Add a photo to this gallery

Groundhog Day For A Black Man
When a black man lives the same day over and over again, he tries changing his behavior to survive a police interaction.

What's at the Bottom of SCP-087? (SCP Animation)
Add a photo to this gallery
Retrieved from "https://powerlisting.fandom.com/wiki/Temporal_Looping?oldid=1728225"
Community content is available under CC-BY-SA unless otherwise noted.