Possess traits and powers of a Time Monster.

The power to have the powers and abilities of a temporal monster. Variation of Temporal Entity Physiology and Monster Physiology.

The users of this ability gain the abilities of a temporal monster and are able of manipulating, accelerating, reversing, stopping or even looping time, as well as traveling through and withstanding the effects of time. 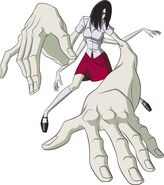 The Time Eater (Sonic the Hedgehog) is a monster that erases time and space.
Add a photo to this gallery
Retrieved from "https://powerlisting.fandom.com/wiki/Temporal_Monster_Physiology?oldid=1508823"
Community content is available under CC-BY-SA unless otherwise noted.