As a user of the Speed Force, Bart Allen/Kid Flash (DC Comics) can use its energy to prevent himself from being affected by temporal alterations

Be immune to alterations in the time stream.

The power to be immune to alterations in the time stream. Sub-power of Time Manipulation. Variation of Selective Invulnerability. Not to be confused with Temporal Immunity.

The user is immune to alterations in the time stream, allowing them to retain memories of prior timelines before the alterations when others may not. They'll notice if someone time travels to the past or someone rewinds time to the point the event will occur.

Professor Paradox (Ben 10: Alien Force) because he exists outside of time.

Clockwork (Danny Phantom) possibly due to existing in or out of time. 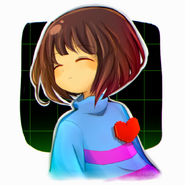 Whenever goes Frisk (Undertale) back to the place they saved before, Frisk isn't affected by the changes in the timeline.

The Krenim weapon ship (Star Trek: Voyager) is surrounded by temporal shields that keep it immune to the effects of its own Temporal Erasure weapon.
Add a photo to this gallery
Retrieved from "https://powerlisting.fandom.com/wiki/Temporal_Protection?oldid=1409670"
Community content is available under CC-BY-SA unless otherwise noted.