The ability to wield or create weapons that can manipulate time.

User can to create of wield any kind of weaponry that has power over time, which grants the user of wide variety of temporal abilities such as controlling the flow of time, creating time portals, or even rewriting history as one sees fit. This ability is not only specific to mystic weapons, but also technologically advanced weapons. The power of the weapons depends on what they were created for or what level of chronokinetic ability they posses.

The Krenim weapon ship (Star Trek: Voyager) could push anything outside the space-time continuum, erasing it from history. 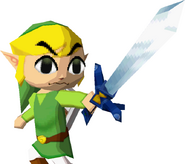 The Time Scepter (Teenage Mutant Ninja Turtles) is a device that facilitates Time Travel, while also possessing the power to scatter others across alternate timelines and realities and being used as a conduit for Spell Casting.
Add a photo to this gallery
Retrieved from "https://powerlisting.fandom.com/wiki/Temporal_Weaponry?oldid=1508846"
Community content is available under CC-BY-SA unless otherwise noted.