The power to manipulate tentacles of oneself or others. Variation of Organ Manipulation and Natural Weaponry Manipulation.

The user has complete control over the tentacles of oneself and others, allowing them to freely alter and manipulate tentacles, increasing and decreasing the number, placement, type, etc., healing/causing tentacle-damage/sicknesses, etc.

Yivo (Futurama) can generate and control a seemingly infinite number of tentacles.

Doctor Octopus (Marvel Comics) has full control over his cybernetic tentacles, even when they have been severed from his body and are separated from him by vast distances. 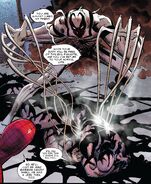