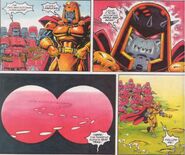 Chase Davenport (Lab Rats) Bionic Eyes allow him to conduct Thermal scans and preserve heat signatures inside a bionic or a normal human, but Taylor/S-1 has the ability to camouflage from his heat detection.
Add a photo to this gallery
Retrieved from "https://powerlisting.fandom.com/wiki/Thermoreception?oldid=1614141"
Community content is available under CC-BY-SA unless otherwise noted.