Brainy Barker (Krypto the Superdog) can create 3-D images when reading someone's mind, projecting their thoughts and memories and making everyone see them.

The ability to make ones thoughts visible to all. Sub-power of Telepathy and Thought Manipulation.

User can manifest their thoughts/telepathy into 3-D images, projecting their thoughts and memories (including ones they are reading) and making everyone see them.

Pearl (Steven Universe) manifesting some her memories of the Gem War. 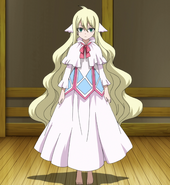 Due to her real body is in a comatose state inside Fairy Heart, Mavis Vermilion (Fairy Tail) is able to create an apparition of herself to communicate and perform ordinary tasks however only Fairy Tail members can see her.
Add a photo to this gallery
Retrieved from "https://powerlisting.fandom.com/wiki/Thought_Manifestation?oldid=1675765"
Community content is available under CC-BY-SA unless otherwise noted.