The power to create threads. Sub-power of Thread Manipulation. Variation of Object Creation. 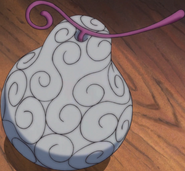 Ito Ito no Mi (One Piece) is a Paramecia-type Devil Fruit that allows the user to create and manipulate strings, making the user a String Human.
Add a photo to this gallery
Retrieved from "https://powerlisting.fandom.com/wiki/Thread_Generation?oldid=1101230"
Community content is available under CC-BY-SA unless otherwise noted.