Lester/Bullseye's (Marvel Comics) innate ability to throw any projectile with great unerring accuracy and deadliness borders on superhuman able to use virtually any common object as a lethal projectile actually makes him more dangerous than many characters who do have superhuman powers.

The user is able to wield any throwing weapon they put their hands on with great prowess and accuracy. The user can throw multiple rounds of projectiles with quick succession. A master of this ability can turn close-ranged weapons and small objects into an unconventional projectile. As proficient fighters, their throwing skills are extraordinary where they are even capable of hitting pressure points and other weak spots with ease. 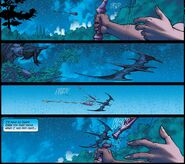 Cinderella (Shrek)
Add a photo to this gallery
Retrieved from "https://powerlisting.fandom.com/wiki/Throwing_Weapon_Proficiency?oldid=1558391"
Community content is available under CC-BY-SA unless otherwise noted.