Frank (Fantastic beasts and where to find them) the Thunderbird Magizoologist Newton Scamander rescued from traffickers in Egypt in the 1920s.

Use the traits of thunderbirds

The power to use the abilities of thunderbirds. Variation of Mythical Avian Physiology.

User with this ability either is or can transform into a Thunderbird, a vast bird capable of creating storms and thundering while it flies: clouds are pulled together by its wing-beats, the sound of thunder made by its wings clapping and lightning the light flashing from its eyes when it blinks.

Depending on the people telling the story, the thunderbird is either a singular entity or a species. In both cases, it is intelligent, powerful, and wrathful. All agree one should go out of one's way to keep from getting the thunderbirds angry.

Griffin (Devil May Cry) is a thunderbird demon. 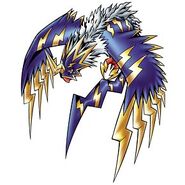 Thunderbirmon (Digimon) is known to be the mythical thunder bird. 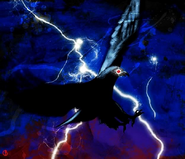 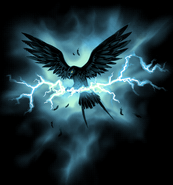 Add a photo to this gallery
Retrieved from "https://powerlisting.fandom.com/wiki/Thunderbird_Physiology?oldid=1658289"
Community content is available under CC-BY-SA unless otherwise noted.