The Time Eater (Sonic the Hedgehog) can devour and destroy timelines.

"Could even you survive the destruction of time itself?"
"I... do not know. Even when measured against eternity, one moment must still precede the next."
― Reed Richards and The Beyonder (Marvel Comics)

"Alright, this next test may involve trace amounts of Time Travel. So, word of advice: if you meet yourself on the testing track, don't make eye contact. Lab boys tell me that'll wipe out time. Entirely. Forward and backward. So do both of yourselves a favor and just let that handsome devil go about his business."
― Cave Johnson (Portal 2)

The power to destroy time. Sub-power of Time Manipulation and Destruction. Opposite to Time Frame Creation.

The user of this power can destroy or dismember a timeline. This may be accomplished by accelerating to the end of the universe, reducing it until it seizes or by simply annihilating it. By doing this, the user can end bad memories or affect peoples lives positively or negatively by threatening to destroy others futures or erase moments and events that were crucial and affected the lives of many people, such as a war or a massacre.

However, they could also erase misunderstandings and fights which would be beneficial. Not only this, but if a user of this power is moved to another dimension, they will be able to destroy the timeline of that reality as well.

The Chronovores (Doctor Who) can destroy time by devouring it.

David Clinton/Chronos (DC Animated Universe) abused the timestream with his Time Belt, causing all timelines except the Beginning of Time to collapse. 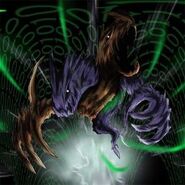 ZeedMillenniummon (Digimon) can use Time Destroyer to utterly erase its target from Space-Time.

Zeno and his future counterpart (Dragon Ball Super) using Erase that can even destroy an entire timeline, saving Future Trunks and Future Mai who escaped to the present timeline.

Herrscher of the End (Honkai Impact 3rd) has the ability destroy all time.
Add a photo to this gallery

ジョジョ This is King Crimson's ability! 『HD』
Add a photo to this gallery
Retrieved from "https://powerlisting.fandom.com/wiki/Time_Destruction?oldid=1548458"
Community content is available under CC-BY-SA unless otherwise noted.