The power to distort time in any form. Sub-power of Space-Time Distortion. Combination of Time and Distortion Manipulation.

The users can distort any period of time to stop it, to redo any event, slow down time, or create a space where time moves faster or slower than outside it. They can use the distortion of time to reverse the flow and throw enemies into a disarray or distort other time manipulators causing their powers to not work properly.

When in the presence of the Soul Reaver, Raziel (Legacy of Kain) is able to trigger distortions in time powerful enough to rewrite history, which is normally immutable.

When in the presence of Raziel or a past/future version of itself, the Soul Reaver (Legacy of Kain) is able to trigger distortions in time powerful enough to rewrite history, which is normally immutable. 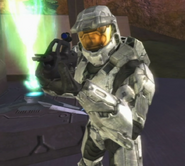 The Eight Doctor (Doctor Who) can distort time.

Dialga (Pokémon) using Roar of Time to distort time itself.

Murozond (Warcraft) can use an orb of temporal energy that causes temporal distortion.

Vassago (Valkyrie Crusade) can distort time.
Add a photo to this gallery
Retrieved from "https://powerlisting.fandom.com/wiki/Time_Distortion?oldid=1508925"
Community content is available under CC-BY-SA unless otherwise noted.