Gwen Tennyson (Ben 10) time traveled to puck up younger Ben & Gwen to teach older Ben to not be arrogant ...

... Later in alien force she went back in time to prevent Kevin's mutation.

As the Master of Time, Clockwork (Danny Phantom) can create ghost portals that allow not only allow people to go from the Ghost Zone and the Living a realm but also allow other people to time travel or use them as screens in his lair. 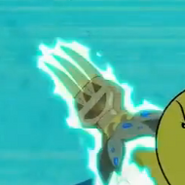 Cheetah Claws (Xiaolin Chronicles) allow the user to create a time bubble which allow them to travel to the past.

The Great Clock (Ratchet and Clank: A Crack in Time)

…pocket dimension full of portals connected to all events of the past, the present, and the future.