Sternritters (Bleach) are bestowed "Schrift" for their letter designations

Be bestowed with titles with supernatural or other attributes.

The circumstance of being bestowed with a title with supernatural or other attributes. Variation of Power Bestowal.

The beings affected by this circumstance can be bestowed a title which is summing up an entire complex narrative, a colorful cast of characters and an inventive concept with a few words can be quite an art. What you choose will bear the burden of being the work's representative and designation.

Titles can gain empowerment powers or inducement powers when granted titles or be gifted with other abilities.

On other occasions, the users are to use grants powers or the powers they already have as being part of a group for a special purpose or a unison power with requires some or all of the members. Ex. To seal something away, to act as a power source, etc.

Kion (The Lion Guard) bestowed the titles of Bravest, Fastest, Strongest, and Keenest of Sight onto each member of his Lion Guard...

...and his own title of the Fiercest onto Vitani upon his retirement.

After losing a match in Not Lives, Kyouka (Not Lives) was somehow bestowed GM status, allowing her to easily defeat the opponent she couldn't before.

Jesus (Judaeo-Christianity) was known as Christ, a title translated as "Anointed One", given only to the chosen blood son of God predestined to save the world.

Azazel (Judaeo-Christianity) was known for having many titles that modern people have commonly mistaken for actual names, one of them was... 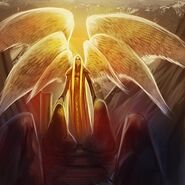 ...Lucifer a title given to him for being the most beloved angel in heaven long before his fall which translates as "Light Bringer"...

... and the other was known as Satan a new title given to him after his fall because of the sin of rebellion against God, which is translated as "Accuser" or "Adversary" the living incarnation of sin and evil.
Add a photo to this gallery
Retrieved from "https://powerlisting.fandom.com/wiki/Title_Bestowal?oldid=1570940"
Community content is available under CC-BY-SA unless otherwise noted.