Roman Sionis/Black Mask (DC Comics) is an expert on torture techniques that would make talk even the most strong-willed person.

Possess an innate understanding of torturing.

""Torture has never been a reliable means of extracting information. It is ultimately self-defeating as a means of control, and so one wonders why it is still practiced. The only possible reason must be... pleasure.""
― Capt. Jean-Luc Picard, Star Trek: The Next Generation, "Chain of Command: Part II"

The ability to possess an innate understanding of torturing. Sub-power of Tormentor. Variation of Intuitive Aptitude.

The user possesses an incredible and innate understanding/knowledge of torturing, able to break the wills of others by any means.

Tenzen Yakushiji (Basilisk) tortured Kagero into a slow and painful death by shooting needles at her body.

The Joker (DC Comics) is extremely adept in torturing his victims endlessly, which includes...

...shooting Barbara Gordon/Batgirl in front of her father, Jim Gordon...

...and later tortures Gordon with nude pics of her in an attempt to drive him mad... 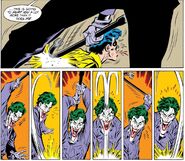 ...viciously beat Jason Todd/Robin to death with a crowbar...

...recorded himself torturing Alfred Pennyworth as he burned his eyes with ammonia.

The Saki Clan of the Kan Ki Army (Kingdom) are specialists in the art of "information gathering" from enemy soldiers.

Darth Vader (Star Wars)
Add a photo to this gallery

Archer Mid Rampage !!!
Add a photo to this gallery
Retrieved from "https://powerlisting.fandom.com/wiki/Torture_Intuition?oldid=1742765"
Community content is available under CC-BY-SA unless otherwise noted.