Lillendi (Planescape) are able to totally convert anything they consume into magical energy, leaving absolutely no waste material of any kind and breaking down everything into usable energy.

User can totally convert absolutely anything/everything into a usable state and the reverse, such as converting any fuel completely into energy, including any/all by-products and leftover or waste material. No matter what its used for (digestion/food, energy, air, etc.). They will be able to completely break it down and convert all of it into a usable form, leaving absolutely nothing of what the substance or product originally was or even its reverse by converting energy into matter with no spill-off of energy or explosions.

Depending on the product/substance being used and what it's being converted into, the effects may be temporary or permanent.

Fin Fang Foom (Marvel Comics) most notable of the draconian Makluan can not only change forms and animate the motionless... 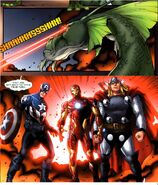 ...but can just as easily undo whatever alterations he's made prior with a glance. 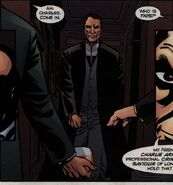 The Reality Gauntlet (Danny Phantom) can turn things into anything the wearer desires with The Yellow Gem of Form.
Add a photo to this gallery
Retrieved from "https://powerlisting.fandom.com/wiki/Total_Conversion?oldid=1720559"
Community content is available under CC-BY-SA unless otherwise noted.