After absorbing the power of Legion's Compass Rose Persona, Rogue (Marvel Comics) gained the ability to teleport to anyone and locate her lost allies.

The user can teleport to any person, instead of teleporting to a place like most teleporters. Unlike Empathic Teleportation, they do not have to necessarily have any emotions for the person they wish to go to and can teleport to them with relative ease no matter where they happen to be. 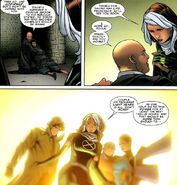 ...teleporting to her while in the middle of a conflict.

Obito Uchiha (Naruto) can track his target and teleport to them.

Gwen (Sabrina Goes to Rome) attempts to use a tracking spell...

... and winds up in a snowglobe.
Add a photo to this gallery
Retrieved from "https://powerlisting.fandom.com/wiki/Tracking_Teleportation?oldid=1566242"
Community content is available under CC-BY-SA unless otherwise noted.