" Sokka, you must continue your training on your own. If you stay on this path, I know that one day, you will become an even greater master than I am."
― Piandao (Avatar: The Last Airbender))

"He put rookies through Hell and back. He trained them to perfection."
― Kyle Rayner on Kilowog's training regime (DC Comics)

"I used to train Bad guys to be worse guys. Not many people liked me back then. Especially the ones I trained."
― Silas Burr/Cyber to the Thinkrer (Marvel Comics)

"Not bad, but not enough. Be it training, strategy or resolution, everything is not enough! I will show you real strength that has been completely trained!!!"
― Douglas Bullet (One Piece: Stampede)

The circumstance in which one develops incredible abilities through extensive training. Variation to Experientially Induced Powers. 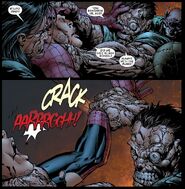 Jigsaw (Marvel Comics) possesses incredible physical abilities due to constantly working out while in prison, enough to overpower Spider-Man and break his wrist.

Ikki Kurogane (Chivalry of a Failed Knight) has rigorously trained his body to uttermost perfection to make up for his lack of magical capacity,...

...allowing him such feats as removing his physical limiters to fight at full strength.

...continued his training by learning to break through his limitations and push his body to superhuman levels with Master Muten Roshi's Kame-Sennin Ryu...

...precision, and the Bukūjutsuki/Dancing Sky Art from Mr. Popo and Kami...

Though nowhere near the Z-Fighters' level, Mr. Satan/Hercule (Dragon Ball series) is nonetheless more powerful than an ordinary human thanks to his training, able to pull off such feats as moving faster than the eye can see, pulling a line of four buses several feet with his bare hands, and surviving hits from Perfect Cell and Kid Buu.

Through four months of rigorous training, Frieza (Dragon Ball Super) became the first of his kind to awaken the Ultimate Evolution.

...and hand to hand combat skill as a result of the training regimen his grandfather, Garp put him through as a child.

Through years of rigorous training regimen since childhood, which consist mainly of grueling body building exercises in addition to hard training in swordsmanship, Roronoa Zoro (One Piece) has...

Due to years of extremely hard training under chef Zeff since childhood, Sanji (One Piece) gained...

...which enables him to use an array of handstands for Zeff's versatile Black Leg Style, a powerful kick-based martial art.

After two years of extremely rigorous training, the Straw Hat Pirates (One Piece) became tremendously powerful, being able to survive the extreme dangers of the New World...

...defeating and holding their own against a large numbers of powerful Marine soldiers...

...and the powerful armies of the Four Emperors/Yonko.

Those who practice Hokuto Shin Ken/Big Dipper God Fist (Fist of the North Star) train to unlock and use their bodies' full muscle potential.

...and had his Spirit Energy greatly improved by the aid of her Spirit Cuffs.

Having intensively trained with his Stand since his youth, Jean Pierre Polnareff (JoJo's Bizarre Adventure) wielded his Silver Chariot with the expertise of a seasoned swordsman.

Though elderly, Heihachi Mishima (Tekken series) possesses incredible strength and electrical powers due to his training in his family's Mishima-Style Fighting Karate.

General Dru-Zod (Injustice: Gods Among Us) learned from another Phantom Zone inmate to manipulate the zone's existence for his own use.
Add a photo to this gallery
Retrieved from "https://powerlisting.fandom.com/wiki/Training_Regimen?oldid=1422909"
Community content is available under CC-BY-SA unless otherwise noted.