Son Goku (Dragon Ball series) has created various variations/modifications of the Kamehameha Wave, the Feet Kamehameha being just one.

The power to create advanced modifications and variations of special attacks/techniques. Sub-power of Attack Manipulation. Variation of Special Attacks and Power Modification.

The user can create advanced variations and modifications of pre-existing special attacks/techniques using various means, such as charging more power into the technique.

Banjo and Kazooie (Banjo-Kazooie) perform the Bill Drill, an enhanced version of the Beak Buster.

Among Son Goku's (Dragon Ball) different modifications of the Kamehameha are the Super Kamehameha...

...and the Rebirth Kamehameha.

Son Goku (Dragon Ball Z) has also created several modifications to the Spirit Bomb, such as the Large Spirit Bomb...

...and the Universal Spirit Bomb.

Frieza (Dragon Ball) performing the Death Saucer, a modified version of the Destructo Disc that can be remote controlled.

...and has multiple variations of his Death Ball technique...

...and the Golden Death Ball.

...and performs the Barrage Death Beam, a rapid-fire variation of the Death Beam. 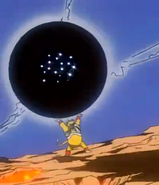 ...and the Flaming Death Ball. 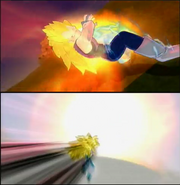 Vegeta (Dragon Ball) performing the Crimson Galick Gun, an advanced version of his Galick Gun, as a Super Saiyan 3.

Naruto Uzumaki (Naruto) has created various modifications/variations to his father's Rasengan technique, such as the Big Ball Rasengan...

...and later modifies his Rasenshuriken with the chakra of the nine Tailed Beasts.

Kakashi Hatake's (Naruto) Lightning Cutter is an enhanced and concentrated form of the Chidori.

Using the power of his Cursed Seal of Heaven, Sasuke Uchiha (Naruto) modifies and enhances his Chidori into the Flapping Chidori.

While using Gear Second, Monkey D. Luffy (One Piece) modifies his Gum-Gum/Gomu Gomu no Gatling into the Gum Gum/Gomu Gomu no Jet Gatling, a barrage of supersonic speed strikes... 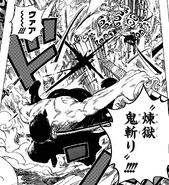 Roronoa Zoro (One Piece) performs the Rengoku Onigiri, a much stronger version of his Onigiri technique...

Link (The Legend of Zelda) performs the Great Spin, a modified Spin Attack with increased range and power. 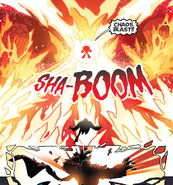 Shadow the Hedgehog (Archie's Sonic the Hedgehog) has developed different variations of his Chaos Blast for different situations, ranging from a massive explosion... 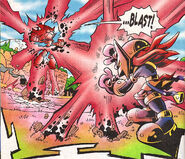 Inuyasha's (InuYasha) perfected Meidō Zangetsuha is modified to take the form of a barrage of dimensional blades rather than a simple portal, allowing it to affect targets that were resistant to the original version

Fox McCloud (Star Fox Adventures) using the Super Ground Quake, a more powerful version of the Ground Quake.
Add a photo to this gallery
Retrieved from "https://powerlisting.fandom.com/wiki/Trait:Attack_Modification?oldid=1540078"
Community content is available under CC-BY-SA unless otherwise noted.