King Bradley/Wrath (Fullmetal Alchemist) is able to channel his anger into combat while remaining completely calm and in control.

Channel the power of their rage while maintaining absolute control.

"Anger can give you great power. But if you let it, it will destroy you."
― Henri Ducard (Batman Begins)

"Anger is a sword, however you need training and experience to use it. You control the sword, not the other way around."
― Stick (Marvel Cinematic Universe)

"We have to put aside our hatred and overriding desire to destroy one another and work together!"
"That's easy. Suppressing that stuff is the only way we've gotten through every single day since we met."
― Red Mage and Thief (8-Bit Theater)

"Doctor Banner. Now might be a really good time for you to get angry."
"That's my secret, Cap. I'm always angry."
― Captain America and Bruce Banner (The Avengers)

"On this night, the rules are gone. No jokes. No punches pulled. As of tonight, no one gets away. No one threatens my family. No one. No One. "
― Peter Parker/Spider-Man (Marvel Comics)

"He never raised his voice, that was the worst thing. The fury of the Time Lord."
― Brother/Son of Mine (Doctor Who)

"Breathe, Raph. Splinter's right. I need to concentrate and focus my anger. Sharpen it. Give it form."
― Raphael (Teenage Mutant Ninja Turtles 2012)

User can attack in full rage while retaining control and are able to attack with the relentless strength of a madman while gaining the speed and precision of a surgeon.

Even with his easy-going attitude, Son Goku (Dragon Ball Z) felt rage at the loss of his friends when he faced Nappa...

...and even with his heart tainted of seeing his best friend, Krillin, die before his eyes,...

...it was a quiet but fierce battle against Frieza.

Meliodas (Nanatsu no Taizai) is called the Dragon Sin of Wrath due to his dangerous and destructive temper. After training in Istar, he has not only regained his full power but achieved a state of quiet and controlled fury through projecting it at a constant rate in battle.

Even in their younger years, as part of the Hyuga Clan (Naruto) Neji and Hinata fight with controlled tempers and careful precision.

Madara Uchiha (Naruto) held an angry disillusionment with the Shinobi world for its neverending disorder and chaos,...

...though he expresses it mostly in a cold and uncaring fashion.

Though usually carefree, Monkey D. Luffy (One Piece) can still be silently yet extremely enraged.

Despite Doflamingo's (One Piece) relaxed attitude, he does have a temper, shooting Law three times, his plans for SMILE ruined, being dethrone, Luffy's interference and desperation to kill him, he still retains his trademark smile because he couldn't get any madder.

Saitama (One-Punch Man) showing his rage in a calm but a intimidating way.

Kurama's (Yu Yu Hakusho) anger made him act on the impulse to kill Gourmet and sentencing Toguro into a lifetime of suffering.

Vali Lucifer (Highschool DxD/Slash Dog) despite being mostly calm and collected, can feel incredible anger towards those enemies capable of provoking his rage.

Though stoic and calm, Goblin Slayer (Goblin Slayer) holds an indomitable rage and hatred for goblins which drives his obsession to kill and massacre them.
Add a photo to this gallery

Asura (Asura's Wrath) enters his Mantra form through this.

Despite his short temper, Kratos (God of War) can keep calm even against impossible odds.

By the time of the Norse gods, Kratos (God of War) can keep calm and channel his anger in combat through his Spartan Rage.

Wolf/Sekiro (Sekiro: Shadows Die Twice) is a supremely calm and devoted Shinobi, that even superior foes cannot best him twice.
Add a photo to this gallery

While others view it as a weakness, Jason Todd/Red Hood (DC Comics) has focused his bottomless rage...

...into a disciplined and deadly fury as he fought his former mentor/partner Batman.

The Challenger (Marvel Comics) is an Elder of the Universe scorned by the usurper of his name, boasting incredible power tempered yet honed by his eons spanning fury.

In his Green Scar persona, Bruce Banner/The Hulk (Marvel Comics) learned to focus and control his anger, remaining calm and collected while becoming the most powerful Hulk incarnation yet.

Enemies and allies alike agree that Peter Parker/Spider-Man (Marvel Comics) is at his most dangerous and terrifying when he's so angry he stops his trademark wisecracks...

...such as when he hunted down the Kravinoff family for putting him and his "spider family" through torment, ripping the flesh off of Sasha Kravinoff's face while remaining calm and collected.

While it happened only twice that she had no control over her anger, Princess Celestia (My Little Pony Series), combined with her kind-hearted nature and level-headed nature, she tends to be intimidating and unnerving even if her anger is under control whilst barely raising her voice. 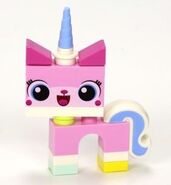 Princess Unikitty (The Lego Movie) has a powerful anger which she keeps intact with thinking positive.
Add a photo to this gallery

Rupert Giles (Buffy the Vampire Slayer) was consumed with rage after Angelus killed Jenny Calendar, burning down his lair and beating him with a flaming baseball bat while remaining calm and collected.

By his own admission, Bruce Banner (Marvel Cinematic Universe) is "always angry", allowing him to freely shift into the Hulk.

By using the pain of losing his wife, the loss of his limbs and his new agonizing cybernetics, Darth Vader (Star Wars) was of the most powerful Dark side users in universe.
Add a photo to this gallery
Retrieved from "https://powerlisting.fandom.com/wiki/Tranquil_Fury?oldid=1651875"
Community content is available under CC-BY-SA unless otherwise noted.