King Bradley (Fullmetal Alchemist), is able to remain calm in any situation despite being the embodiment of Wrath.

Remain calm at all times

The ability to enter a state of self-induced tranquility. Not to be confused with Apathy. Opposite of Feral Mind.

User can remain calm in virtually any situation, allowing them to think with perfect clarity even when under extreme emotional or physical distress. Users can endure mental stress, and can be essentially immune to emotional manipulation and highly resistant to torture.

Sōsuke Aizen (Bleach) is well known to defeat the Soul Reapers and Visoreds due to being a manipulator and his Zanpakuto.

Zommari Rureaux meditates to keep calm and possibly being arrogant due to being the fastest Espada.
Book of the End.png
Shūkurō Tsukishima (Bleach) maintains his composed nature, even when overwhelmed and injured in battle.

Superman (DC Comics) makes it a point not to kill, and will not resort to violence unless truly necessary.
115672362 e126a3f4ab o.jpg
The Twins (The Matrix) do not lose their temper quickly.

Doflamingo (One Piece) is one of the most carefree characters in the One Piece world. 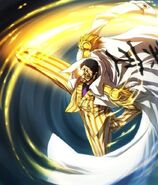 Kizaru (One Piece) is calm, very laid-back and easygoing.

Dracule Mihawk (One Piece) is one of the most serious characters in the series and never unnecessarily reveals emotions on the battlefield.

Meliodas (Nanatsu no Taizai) Just before regaining his original power, he gained full control over his furious wrath.

Clear Note (Zatch Bell!) is able to do sadistic and evil actions in a remarkably calm manner.
Add a photo to this gallery
Retrieved from "https://powerlisting.fandom.com/wiki/Tranquil_State?oldid=926887"
Community content is available under CC-BY-SA unless otherwise noted.