Use the traits of angel of godly arcane powers.

The power to use the abilities of godly arcane angels. Ultimate pinnacle of Mystic Angel Physiology. Opposite of Transcendent Demonic Mage Physiology

User of this ability either are or can transform into a angelic mage of unimaginable power. Their immeasurable physical and spiritual might is only equaled by their transcendent understanding and mastery of the mystical arts, able to use with unimaginable expertise of any and every form of magic on a cosmic scale.

They usually possess precognitive abilities and strategic acumen on par with their angelic transcendence and sorcerous prowess, often bordering on nigh-omniscience, making them some if not the most powerful entity of their respective cosmology.

The Grand Priest (Dragon Ball Super) is said to be one of the strongest beings in the entire multiverse, wielding magical powers he can materialize.

Kaori Shirasaki (From Common Job to Strongest In The World); via her Apostle form 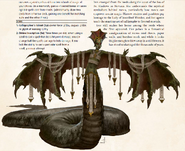 Irez (Pathfinder) is a master of rune magic, with scribes and spells in her divine portfolio and wizards among her followers.
Community content is available under CC-BY-SA unless otherwise noted.
Advertisement