With the power of the Infinity Gauntlet, Thane (Marvel Ultimate Alliance 3: The Black Order) summoned the Infinity Armor, a suit forged for infinite power, described by Thanos as "far too powerful for any mortal being to contain."

"The first piece made him the strongest fighter on Earth, the final piece...will make him a god."
― Narrator (Fatal Fury: The Motion Picture)

"The Infinity Armor was designed to unlock the potential of each Infinity Stone, enhancing it exponentially. Power that strong could corrupt even the noblest soul."
― Drax the Destroyer (Marvel Ultimate Alliance 3: The Black Order) explaining the power of of the Infinity Armor

"The great thing about this armor is that it not strengthens my defenses, but boosts my offense as well. You can't stand up to me, I'm a living, breathing, sentient tank! "
― Shinobu Sensui (Yu Yu Hakusho) describing the power of his Sacred Energy Armor

The ability to utilize the armor of a god, or armor of godly power. Variation of Power Suit.

The user is able to utilize a powerful suit of armor that yields godly might. In some cases, it is the armor once worn by a god. In others, it is armor that possess god-like power. Regardless, when the armor is worn, the user's power increases exponentially, and gains even greater abilities.

The Susano'o Unit (BlazBlue) is a divine suit of armor that grants its user to ability to cut through time itself. It was wielded by Hakumen, one of the Six Heroes, known as the White Susano'o.......

....And then wielded by Yūki Terumi, known as the Black Susano'o, who is its original owner and the Japanese storm god Takehaya Susano'o-no-Mikoto.

While wearing one of her strongest armors, the Nakagami Armor, Erza Scarlet (Fairy Tail) is capable of dispelling Magic, and gains a peerless sword, which can cut or slice through anything, even "space". With the armor, Erza possesses god-like powers that allow her to defeat any enemy.

After collecting all six pieces of the Armor of Mars (Fatal Fury: The Motion Picture), Laocorn Gaudeamus was able to become God Laocorn, dawning a full set of armor and obtaining the power of the Roman god of war.

Regulus Rey Leather Rex (Highschool DxD) is the Balance Breaker armor that embodies the power of the god-slaying Battle Axe Regulus Nemea. It grants Sairaorg a tremendous increase in strength/defense. Able to fight on pair with the most powerful supernatural beings. 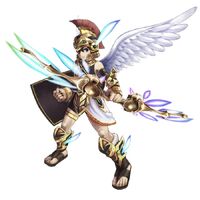 The Three Sacred Treasures (Kid Icarus series) are legendary items possessed by Palutena. When the Arrow of Light, Mirror Shield, and Wings of Pegasus are put together, they possess the power needed to defeat Medusa. However, they were soon destroyed by Hades. 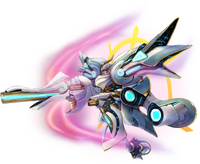 The Great Sacred Treasure (Kid Icarus: Uprising) is an incredibly powerful weapon that is able to battle Hades. In addition to its power, it is able change it's form to adapt whenever it is damaged. 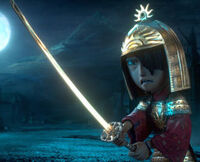 The components of Hanzo's Armor; the Sword Unbreakable, the Breastplate Impenetrable, and the Helmet Invulnerable, (Kubo and the Two Strings), when put together, are so powerful that they threaten the very authority of the Moon King and the Heavens he precides over.

The God Cloths (Saint Seiya: Knights of the Zodiac) are a unique class of Cloths worn by Athena's Saints that have existed since the Age of Myth. The Cloths provide their Saints a level of protection and power that surpasses that of Gold Saints and even some minor Gods, such as Thanatos and Hypnos. 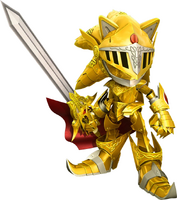 When Caliburn became Excalibur using the magic of the sacred swords, Sonic (Sonic the Hedgehog) became Excalibur Sonic, dawning golden armor that protected him from the attacks of the Dark Queen. 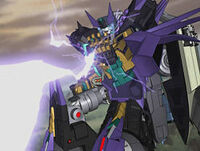 The Armor of Unicron (Transformers: Cyberton) is what Megatron obtained after escaping from the collapsing Energon Sun. After obtaining the armor, he also gained most of Unicron's power, becoming able to use the armor to heal himself, wield powerful dark energy forces, manifest an energy aura to increase his power, and tap in the power of the Cyber Planet Keys.

Arch Knight (Valkyrie Crusade) is a young girl who possess an ancient divine armor of the gods. 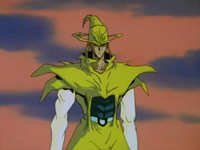 By surrounding his body with his Sacred Energy, Shinobu Sensui (Yu Yu Hakusho) can create his Sacred Energy Armor in two form, one for defense to protect himself against the strongest of attacks...

...and one for offense to boost his physical power to incredible feats.
Community content is available under CC-BY-SA unless otherwise noted.
Advertisement