The Cosmic Raptor (DC Comics) was an immeasurably powerful cosmic entity/force that's power transcended even that of the Super-Celestial Perpetua. Easily defeating her and sealing her away despite being at the peak of her power.

Be a transcendent bird.

User with this ability either is or can transform into a Avian of divine nature, purely godly beings of the sky. Much like any divine beast they are both divine and natural, having complete dominion over their concept of being everything connected to them fundamentally the sky.

Hououmon (Digimon) is a Holy Beast said to be the ultimate form of all bird Digimon. 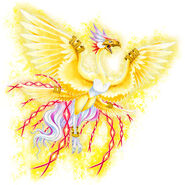 Hououmon X (Digimon) has sacred powers that vastly surpass even most angelic Digimon. 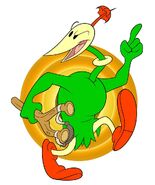 Phenix (Extinctioners) is a phoenix and has vast cosmic powers far beyond those of other superhumans in her setting, verging on godlike.

Xenif (Extinctioners) is a phoenix with even greater power than Phenix, to the point he is virtually a god.

Kronis the Arbitrator (Extinctioners) is a godlike entity so immense even phoenixes such as Xenif are powerless against him, he often takes the form of an anthropomorphic penguin.

Phionix (Extinctioners) was the merging of Phenix and Xenif, making him even more powerful than both combined (though still below Arbiter)
Add a photo to this gallery
Retrieved from "https://powerlisting.fandom.com/wiki/Transcendent_Bird_Physiology?oldid=1695618"
Community content is available under CC-BY-SA unless otherwise noted.