Jesse Turner (Supernatural) is a powerful cambion who acquires godlike power when Lucifer roams the earth, allowing him to alter reality to a nigh-omnipotent level, allowing him to bring myths into reality, turned Castiel into a toy, and, at full power, destroy the host of heaven.

Use the traits of a cambion of godly power.

"Truly strong, this is the ultimate power. That idiot Rizevim was just an imposter of the Devil King Lucifer. You are the true Lucifer. I was right about that. The successor of the [True Devil King], Vali Lucifer!"
― Azi Dahaka (Highschool DxD)

"With Lucifer risen, this child grows strong. Soon, he will do more than just make a few toys come to life—something that will draw the demons to him. The demons will find this child. Lucifer will twist this boy to his purpose. And then, with a word, this child will destroy the Host of Heaven"
― Castiel to Sam and Dean Winchester, describing Jesse's power (Supernatural S5E6: I Believe the Children Are Our Future).

User with this ability either is or can transform into a cambion with godly power. They possess many demonic abilities, inherited from their demonic parents. Their power surpasses all other cambions, allowing them to overpower them and most demons with ease.

Being the daughter of Trigon who happens to be a Demon of godly power, Raven (DC Comics) is an amazingly powerful Cambion in the field of Dark Magic and a various reservoir of demonic abilities, and she can rival her own father into besting him, as well as putting an end to his conquests against mortal life from time to time.

Dante (Devil May Cry series) inherited the power of his father Sparda, wielding powerful strength that defeated such foes as Mundus and Argosax...

...and in his Sin Devil Trigger form is said to possess power surpassing that of Sparda himself. 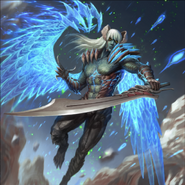 After obtaining his true devil trigger, Nero's (Devil Mat Cry series) power increased to the point where he could rival Dante & Vergil despite only being 1/4th demon.

After devouring the demonic fruit of the underworld tree Qliphoth, Vergil (Devil May Cry series) awakens his Sin Devil Trigger which grants him power surpassing even Sparda. 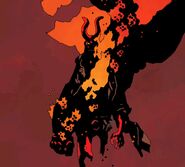 The Demi-Fiend (Megami Tensei series) was a human who was turned partially demonic when Lucifer fused him with a magatama....

...and his power eventually grew to the point where he matched, and even exceeded Lucifer himself. 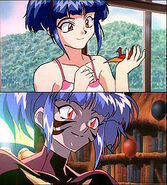 Mayuka Masaki (Tenchi Muyo: Daughter of Darkness): the cambion daughter of Tenchi Masaki and Yuzuha, the demonic spirit/counterpart to the Juraian trees of light, ...

... possesses both the Light Hawk Wings and Demonic powers of the Tree of Darkness, generating and wielding the same Light Hawk Sword as her father.
Community content is available under CC-BY-SA unless otherwise noted.
Advertisement