Be a Transcendent Cosmic Entity.

"Trust your instincts, Elaine Belloc. If mercy’s your aim, be relentless in your mercy. Be absolute. Be yourself, until you bleed."
― Mike Carey, Lucifer

Users either are or can transform into/mimic/use the traits of transcendent primordial beings that predate the universe or someone who has ascended by inheriting the powers of a Type 3 Cosmic Entity.

Their power is so great in power they don't just affect entire planets, stars, galaxies but in some cases, the entire multiverse and beyond and have authority over other cosmic beings and could either be a pantheon or a single entity taking on the responsibility of a collective group instead they're know to be mysterious and powerful beyond mortal comprehension, existing as myths to the oldest species in the universe.

Known as Mother is the creator of the universe. There is no being greater than she, and her powers appear to be limitless 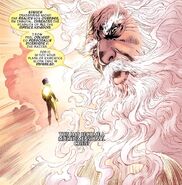 Responsible for the existence of all life in the Multiverse and possibly beyond, in Marvel the One-Above-All (God) is the master and sole superior of the cosmic overseer.

A malevolent entity that resides in the Below-Place -within Marvel the deepest layer of Hell, the One Below All is the dark counterpart (Anti-God) of the One Above All.

The Ultimate Ultimates (Marvel Comics) are the past incarnations of the Marvel Multiverse, each embodying a unique aspect of reality that have been passed down to the next Multiverse, i.e the creation of magic and the invention of science.
Community content is available under CC-BY-SA unless otherwise noted.
Advertisement