Use the traits of demon of godly arcane powers.

The power to use the abilities of demon of godly arcane powers. Ultimate pinnacle of Demon Sorcerer Physiology. Opposite to Transcendent Angelic Mage Physiology

User of this ability either are or can transform into a demonic mage of unimaginable power. Their immeasurable physical and spiritual might is only equaled by their transcendent understanding and mastery of the mystical arts, able to use with unthinkable expertise any and every form of magic on a cosmic scale.

They usually possess precognitive abilities and strategic acumen on par with their demonic transcendence and sorcerous prowess, often bordering on nigh-omniscience, making them some if not the most dangerous entity of their respective cosmology.

Mephistopheles (Valkyrie Crusade) is a demon lord that possesses extremely powerful and unique magic, and is able to grant any wish. 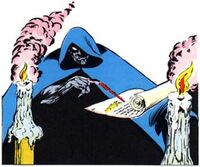 Chthon (Marvel Comics) is an elder god and the creator of all magic, especially black and chaos magic, and the author of The Darkhold, the first tome of magic.

Magik's (Marvel Comics) decorative understanding of the arcane makes her an adept demongod mage in her own right.

Ganondorf (The Legend of Zelda series) is the manifestation of the Demon King Demise's hatred. With the Triforce of Power, his physical and mystical abilities are god-like, and he is invulnerable to mundane weaponry.
Add a photo to this gallery
Retrieved from "https://powerlisting.fandom.com/wiki/Transcendent_Demonic_Mage_Physiology?oldid=1619941"
Community content is available under CC-BY-SA unless otherwise noted.