Titania (Valkyrie Crusade) the divine queen of the fairies.

Use the traits of a godly faery.
Power to use the abilities of fairy with godly power. Ultimate version of Fairy Physiology. Variation of Transcendent Physiology.

User with this ability either is or can transform into a fairy who has ascended to or always had a godly state, being one of the most powerful fairies in existence. 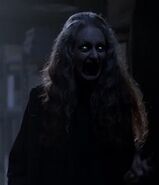 The Wicked Witch (Supernatural) is so powerful that not only does she command a legion of flying monkeys, but she is immune to all weapons and killing methods outside of Oz.

Oberon and Queen Titania (Gargoyles) of the third Race.

Faerie (Seiken Densetsu 3) became a godlike fairy after becoming the guardian to the Mana Tree.

Morgan Le Fay (Ah! My Goddess) is a fairy princess with enough power to equal the goddesses.

Oberon (Renaissance Literature) the king of the fairies.

The Queen of the Fairies (The Legend of Zelda: The Wind Waker) who aided Link by granting him the fire and ice arrows. 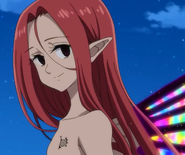 Jareth the Goblin-King (Labyrinth) was a fay with near-limitless power.

Blue Fairy (Disney) is a powerful fairy with no seeming weakness or limit, capable of granting life itself.
Add a photo to this gallery
Retrieved from "https://powerlisting.fandom.com/wiki/Transcendent_Fairy_Physiology?oldid=1580482"
Community content is available under CC-BY-SA unless otherwise noted.