After absorbing the power of the World Rings, the Erazor Djinn was transformed into Alf Layla wa-Layla (Sonic and the Secret Rings), a incomplete, twisted, grotesque genie demon with the power to rewrite realities.

Become a genie of godly power.

The ability to become a genie with powers that are on a godly scale. Variation of Transcendent Physiology. Ultimate version of Genie Physiology.

User with this ability either is or can transform into an all-powerful genie with unimaginable magical power. Their powers and abilities dwarf that of lesser genies and are even able to break the laws of both magic and nature, and warp reality to their liking. 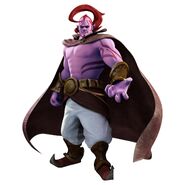 Even before absorbing the World Rings, the Erazor Djinn (Sonic and the Secret Rings) was described as having godlike power by King Solomon, thanks to absorbing the power of the world of the Arabian Nights.

Genie (Valkyrie Crusade) is a extremely powerful genie, able to grant any wish and make anything come true. 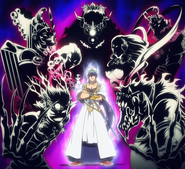 Solomon's 72 Djinns (Magi The Labyrinth of Magic) are the guardian deities of Alma Torran, with enough power to destroy the entire world if their Metal Vessels were to fall into the wrong hands.

As the first Jinn, The Unbound's (The Secret World) power rivals that of its creators, the Host.
Add a photo to this gallery
Retrieved from "https://powerlisting.fandom.com/wiki/Transcendent_Genie_Physiology?oldid=1450189"
Community content is available under CC-BY-SA unless otherwise noted.