Eren Yeager (Attack on Titan) commanding millions of Colossus Titans to flatten the earth via the power of the Founding Titan.

become a giant of godlike power

Users of this ability can gain the traits of a giant of godlike scale (or are one), these giants are immense creatures that embody aspects of nature or the cosmos and often stand in opposition to order, representing more primal and/or chaotic forces - though like their lesser giant cousins individuals vary immensely and thus they can range from malevolent, neutral or benevolent in nature.

Stories of such beings exist in countless folk tales, religions and media across the world - they differ from regular giants in the sheer immensity of their powers - for example Utgard-Loki was so powerful he could trick gods like Thor and Loki into performing cosmic feats of strength for his own amusement, having Thor wrestle Old Age itself, making Thor drink from the ocean via an enchanted cup and most infamous of all trapping Thor and Loki within his glove.

Entire races of such beings can exist such as the Titans, the Fomorians and the Jotunn - some Oni in Japanese folklore also gain godlike powers far beyond even the formidable power of regular Oni, in fiction godlike giants are even more popular and can be found in multiple fantasy games, shows and novels.

Perhaps one of the most striking examples of giants with godlike powers and ambitions in mythology comes in the form of the Gigantomachy, an event in which a group of giants known as the Gigantes waged open war against the Greco-Roman gods and took the battle to Olympus itself, the very home of the pantheon and a place normally seen as completely above the rest of the cosmology : while the Gigantes were unsuccessful they were unable to be killed by the gods and were cast instead under mountains, the phenomena of volcanoes and earthquakes were thus blamed on the imprisoned Gigantes.

Ymir Fritz (Attack on Titan), the first Titan, holding the powers of all the Nine Titans. 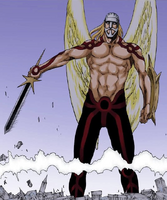 Due to possessing the Heart of the Soul King, Gerard Valkyrie (Bleach) can use its "Miracle" powers to increase his strength and size to colossal proportions in ways that defy physics...

...And even refers to this state as his "godly size". 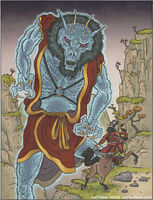 Reiki (Japanese mythology) were terrible godlike monsters created from the souls of Oni. 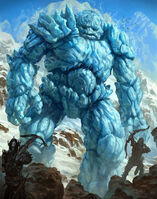 Ymir (Norse mythology) was a godlike giant so immense that the entire world was forged from his body.

Thamur (God of War) was a giant of immeasurable size and power, with his corpse being reanimated as a vessel for Freya to face Kratos in battle.

Jotunn (Norse Mythology) were a race of giants that rival the gods themselves in power and embodied the chaos of nature, most notable of them being Fenrir and Jormungandr.

Gigantes (Greek Mythology) were godlike giants with snakes for limbs, capable of waging war against the gods themselves. 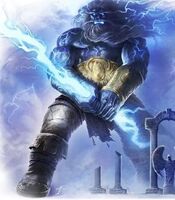 Annam the All-Father (Dungeons & Dragons) is the chief god of all giants in his setting and a Greater Deity. 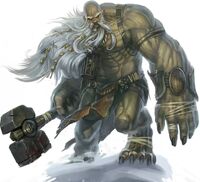 Kostchtchie (Dungeons & Dragons) is a demon lord and patron of frost giants and rage. 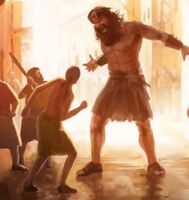 Nephilim (Christianity) were a race of violent giants created via a merging of human and angel, and on numerous occasions were compared to pagan gods, but were ultimately killed off by God via the Flood to stop their corruption of Creation.

Fomorians (Irish Mythology) were hideous giants of godlike power and enemies of the Celtic pantheon, most notable among them being Balor - the origin of the "evil eye" 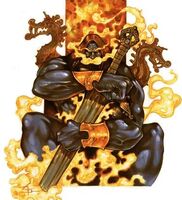 Surtur (Dungeons and Dragons) is a giant-god and patron of fire giants. 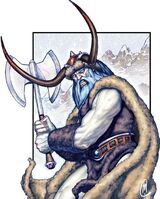 Thrym (Dungeons & Dragons) is a giant-god and patron of frost giants.

Hecatoncheires (Greek Mythology) were among the most powerful of giants, each armed with a hundred limbs and heads - capable of facing the gods in combat. 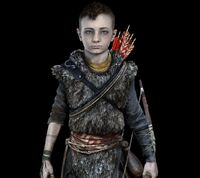 Atreus/Loki (God of War) is the son of Greek God Kratos and the Norse Jötunn Laufey, making him part giant and part god.

the Gigantomachy (Greco-Roman mythology) is perhaps the pinnacle of transcendent giant warfare, where the Gigantes waged war against Olympus itself (the very home of the Greco-Roman pantheon) 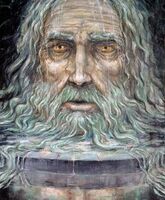 Mimir (Norse Mythology) was a giant who possessed knowledge beyond even that of Odin, as such his severed head (kept alive by a magic well) was often visited by Odin for advice.

As the Eldest Giant, Alcyoneus's (Heroes of Olympus) strongest ability is that he won't die as long as he is in his home territory, the place where he is born, unlike any of the other giants who die by a god and a demigod working together.
Add a photo to this gallery
Retrieved from "https://powerlisting.fandom.com/wiki/Transcendent_Giant_Physiology?oldid=1681541"
Community content is available under CC-BY-SA unless otherwise noted.