"This is only the beginning of your downfall, Wizard!"
"Wizard? Are you kidding me? Wizards do parlor tricks. I throttle the heavens."
― Ranger and Sarda the Sage (8-bit Theater)

"He has more power in his little whisker than a palace full of genies!"
― Genie describing Chaos (Aladdin)

The ability to become a magic user of godly power. Variation of Transcendent Physiology and Magical Entity Physiology.

The user of this ability either is or can transform into a Transcendent Mage: a practitioner of magic who has ascended to a godly state. Users have nearly limitless magical power and can almost effortlessly gain access to power hardly touched by any other mystic.

Eljared (Anima: Beyond Fantasy) is possibly the most powerful mage on Gaia, being at least as powerful as a true God.

Willow Rosenberg (Buffy the Vampire Slayer) is her dimension's most powerful witch, wielding enough raw power to destroy the Earth. 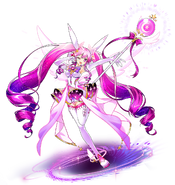 As Metamorphy, Aisha (Elsword) is the most powerful magical girl in existence.

After capturing Wanda, Denzel Crocker (The Fairly OddParents!) harnessed her magical powers to transform the entire world into his own kingdom and command it as its supreme magical ruler.

Thanks to the magical gifts that he received from his Fairy-versary, Timmy Turner (The Fairly OddParents: Abra-Catastrophe!) became as powerful as Crocker was when he had both Cosmo's and Wanda's magic, and became immune to his powers.

August (Fairy Tail) is known as the King of All Magic, and possesses mastery over all forms of magic that exist both old and new and near and far.

By uniting the Phoenix Gate, Grimorum Archanorum, and Eye of Odin, the Archmage (Gargoyles) became a nigh-invincible sorcerer.

Tapestry (Image Comics) Is an all-powerful sorceress with the ability to manipulate personal and existential realities at will.

When Ganondorf (The Legend of Zelda series) obtained the Triforce of Power, his mystical abilities were augmented to god-like proportions, making his magical power unrivaled by any mortal. 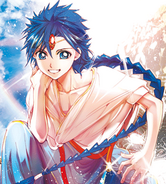 Being a Magi, Aladdin (Magi the Labyrinth of Magic) was born with a limitless supply of magoi, granting him tremendous potential in magic.

Being a Magi who has fallen into depravity, Judar (Magi the Labyrinth of Magic) was blessed by both the White Rukh and the Black Rukh, with near-infinite prowess in magic, which according to Ugo makes him more dangerous compared to a normal Magi.

After acquiring the Scabbard of Excalibur, Merlina the Wizard (Sonic the Hedgehog) became the Dark Queen, gaining the power to control the forces of the underworld and alter the kingdom of Camelot to become eternal.

After acquiring the Tablet of Order and Chaos, Mysterio (Spider-Man: Shattered Dimensions) became an arcane god with power over all reality.

Glossaryck (Star vs. the Forces of Evil) is the most powerful and knowing magical being of the multiverse, and the one who created the Magic High Commission.

The Magic High Commission (Star vs. the Forces of Evil) are a group of extremely powerful magical beings that, alongside Glossaryck, oversee all the magic activity in the multiverse.

Rangda (Valkyrie Crusade) is a all powerful witch.

The Triple Goddess (Wicca Mythology) is the queen of all witches.

Wuya (Xiaolin Showdown) is the most powerful witch in the series, her magical powers dwarfing even Chase Young's and Hannibal Roy Bean's powers combined.
Add a photo to this gallery
Retrieved from "https://powerlisting.fandom.com/wiki/Transcendent_Mage_Physiology?oldid=1452824"
Community content is available under CC-BY-SA unless otherwise noted.
FandomShop Newsletter Join Fan Lab