User with this ability either is or can transform into a merfolk who has ascended to or always had a godly state, being one of the most powerful merfolk in existence.

AncientMermaidmon (Digimon) is the guardian goddess of the birthplace of Digimon, the "Net Ocean", ruling the whole of it and able to handle all water, such as the ocean currents and tidal waves, as if they were her own limbs.

Phorcys (Greek Mythology) is the personification of the hidden dangers of the deep and progenitor of sea creatures.

The Queen Mermaid's (Legend of the Cryptids) voice stirs all of creation and restores Neotellus and it's people eliminating all hatred and strife. 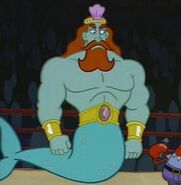 King Neptune XIV (Spongebob Squarepants) is the supreme ruler of the ocean and possesses God like power.

Transcendent Merfolk can become one with the ocean

and one with water itself.
Add a photo to this gallery
Retrieved from "https://powerlisting.fandom.com/wiki/Transcendent_Merfolk_Physiology?oldid=1494541"
Community content is available under CC-BY-SA unless otherwise noted.