While they are a subspecies of humanity, the Deviants/Homo Descendus (Marvel Comics), all have a specific gene that allows them to potentially ascend to godhood.

be or become a mutant of godly power.

The power to become a deviant of godly power. Advanced variation of Mutant Physiology. Variation of Divine Monster Physiology. Opposite to Transcendent Homo Superior Physiology. Not to be confused with Artificial Godhood.

The user either is or can transform into a monstrous mutant of godly power. Apart from regular deviants, these types of freaks can also have a particular mutation that allows them to transcend, becoming godly in the process, especially obtaining various powers and abilities if mutations are just right.

While normal deviants may lose consciousness and rationality as they grotesquely transform, deviant gods on the other hand usually keep both, and despite their almost genetic imperfection, they in return can have unspeakable power over lesser freaks. Another difference, like said before, are less unstable and most are well known, to manipulate their own genetic structures to further mutate themselves, and even turn themselves back into their default forms.

Due to his mutant genes, Frieza (Dragon Ball series) was able to obtain and fully master the Ultimate Evolution of his race, which not only allowed him to fight on par with users of Godly ki...

...but hold a ball of Energy of Destruction in his hands.

After being affected by the Heart of the Universe, Amenhotep IV/Akhenaten (Marvel Comics) gained nigh omnipotent power, gaining Energy Manipulation, Reality Warping, Supernatural Senses, and the ability to pierce dimensional barriers. 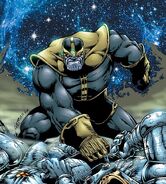 Thanos (Marvel Comics) was born with purple, hide-like skin and a massive body due to his Deviant Syndrome.

Haos (Resident Evil 6) is a prime example of a godly yet an apocalyptic Deviant that has been created to bring the end onto humanity and everything else on Earth, by turning them into C-Virus monsters.

By absorbing all seven Chaos Emeralds, the mutated Chao Chaos becomes Perfect Chaos (Sonic the Hedgehog series), a mysterious and higher being with control over ultimate power with unlimited energy, and possessing power on a godly scale which is said can destroy the world.

The Ultimate Being (Parasite Eve) truly lives up to its name, possessing the full powers of its mother Mitochondrial Eve and able to change its genetic code at will, compressing millions of years of evolution into mere minutes.
Add a photo to this gallery
Retrieved from "https://powerlisting.fandom.com/wiki/Transcendent_Mutant_Physiology?oldid=1392027"
Community content is available under CC-BY-SA unless otherwise noted.