Aaron Corbett (Fallen) is the child of the Lightbringer and a human, as such he is the most powerful nephilim in existence.

Become a nephilim of godly power.

"An ordinary Nephilim is one of the most dangerous beings in all of Creation. But one that's fathered by an archangel, the devil himself? I... I can't imagine the power."
― Castiel (Supernatural)

The user either is or can become a nephilim of godly power, born from a mortal and a transcendent angel in history. Though in most cases not as powerful as their heavenly parent, their abilities far surpasses that of other nephilims, allowing them to easily overpower most angels and demons, even in numbers. Thanks to their transcendent ascendancy, they can also alter the very fabric of reality to a nigh-omnipotent level.

Being sired by Lucifer, an Archangel, Jack (Supernatural) is vastly more powerful than other nephilim, being one of the most powerful beings in Creation...

... surpassing his father and the Archangel Michael of the Apocalypse World who is more powerful than the original...

...and ultimately stealing Chuck Shurley's power and replacing him as God.

Elaine Belloc (DC/Vertigo Comics) due to being sired by a human and the archangel Michael possesses tremendous power far exceeding any nephilim. 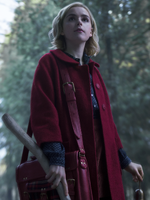 Sabrina Spellman/Morningstar (Chilling Adventures of Sabrina) was born from a human mother and a warlock father, the latter of which was possessed by the Fallen Archangel Lucifer himself during the conception.