The Protomolecule (The Expanse) is an alien parasite that has been shown to consume and feed off of anything to aid in its evolution. Whether it be humans, spaceships or planets.

User with this ability either is or can transform into a transcendent parasite that has the ability to feed off a host and get stronger while the host gets weaker, not only gaining energy and sustenance from the host but also absorb characteristics and traits. They are not limited to organic or biological life but can feed off of inorganic and non-biological things. Transcendent parasite can go beyond the nature of its kind and develop a mutualism with its host where both benefit in some way.

Lavos (Chrono Trigger) is a planetary parasite that directly influenced all technology and life on the planet, evolving the planet's life forms to cultivate it and make itself stronger, before emerging from the planet's core and destroying it. 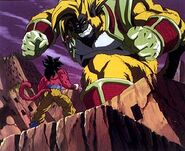 ... but her consciousness lived on within it and she now has a form of transcendence and acts as the parasites brain thus creating a symbiotic nature between the two.

The Protomolecule (The Expanse) attempting to mimic human form...

All-Black (Marvel Comics) is the first Symbiote ever created, and as such, wields enough power to kill beings as powerful as the Celestials...

Mother (Marvel Comics) is an inter-dimensional parasite who feeds on powerful beings and realities found throughout the Multiverse.

Purity (The X-Files) was a parasite so powerful that it is believed it managed to infect almost all life in the Galaxy, with humans and the Faceless Aliens being the few able to resist it.
Add a photo to this gallery
Retrieved from "https://powerlisting.fandom.com/wiki/Transcendent_Parasite_Physiology?oldid=1571412"
Community content is available under CC-BY-SA unless otherwise noted.