The Holy Spirit (Christianity) is the spirit of God, and is known as the most powerful spirit above all.

Become or be a transcendent spiritual god.

"God is a spirit and they that worship him must worship God in spirit and in truth"
― Jesus Christ (John 4, 4:24)

The users of this ability either is or can become a spirit/spiritual being of transcendent/godlike power. Users of this possess incredible power above the class of all manner of spiritual beings, having unimaginable powers and status beyond that of any spirit no matter their nature. Users have absolute supernatural and spiritual powers and are able to effectively control all of existence as much as they have total lordship over all things regardless if they are mundane, supernatural, living, dead, and so on.

Because godlike spirits are of spiritual nature they can be perceived as incorporeal beings, however because of their transcendent nature users are capable of influencing all things such as a universal level from affect things like actual physical beings, creating physical avatars of their own making, and many more abilities beyond their worlds.

The Mother of Faces (Avatar franchise) is an exceptionally ancient and powerful Spirit.

The Soul King (Bleach) is the supreme being that sustains all of reality and created life and death. Without him (or anyone possessing his power), all the dimensions would collapse on each other.

After killing and absorbing his father, the Soul King, Yhwach (Bleach) took his place as the linchpin of all reality, able to sustain and destroy all dimensions at will.

Gerard Valkyrie (Bleach) is the animate Heart of the Soul King, and possesses immeasurable power and is nigh-invincible.

Mimihagi (Bleach) is the animate right hand of the Soul King and has several godly powers, most notably Stagnation.

Pernida Parnkgjas (Bleach) is the animate left hand of the Soul King and has several godly powers, most notably Evolution. 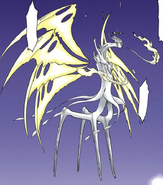 Lille Barro (Bleach) in his Völlstandig’s second form, becomes a powerful Transcendent Being that only a weapon designed to kill gods could hurt him.