The user of this ability is a superhuman mage of godlike levels of both superpowers and magic/mystical abilities. 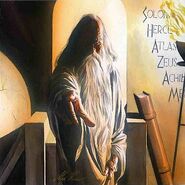 Shazam (DC Comics) is divinely empowered by the Rock of Eternity.

Teth-Adam/Black Adam (DC Comics) gained the same powers as Captain Marvel did by the wizard Shazam.

Illyana Rasputina/Magick (Marvel Comics) is a mutant with the ability to teleport by creating "stepping discs" and is the Sorceress Supreme of Limbo.

Adam Warlock (Marvel Comics) has proven time and again an insanely powerful superhuman being and grand master of magic, even without the infinity gems/stones.
Add a photo to this gallery
Retrieved from "https://powerlisting.fandom.com/wiki/Transcendent_Superhuman_Mage_Physiology?oldid=1451597"
Community content is available under CC-BY-SA unless otherwise noted.